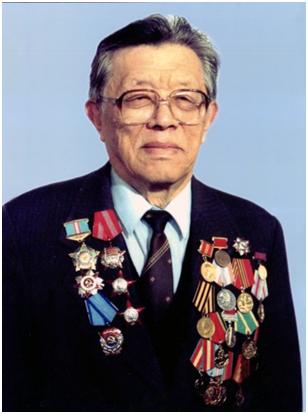 Atchabarov Bahia Atchabarovich was born on September 1, 1919 in the Karakuys area, in the aul No. 1 of the Berkkara volost of the Karkaralinsky district of the Semipalatinsk province (now the Karaganda region of the Republic of Kazakhstan).

The career path of one of the oldest graduates of the Almaty Medical Institute B. Atchabarov began as the head of the sanitary service of tank and infantry regiments in the Soviet army in 1942.

Graduated from graduate school in 1950; continued his career as a junior researcher at the Research Institute of Regional Pathology and in 1952 he was appointed director of the Institute at the age of 32, permanently heading it. Under the leadership of Bahia Atchabarovich, such scientific directions as:

Physiology and pathophysiology of cerebrospinal fluid dynamics and intracranial pressure, anatomical and physiological mechanisms of their occurrence and regulation are attributed to fundamental scientific research. The pathogenesis of the general toxic action of chemicals in the body of animals, the target of which is oxidative phosphorylation, the so-called “Golden energy mechanism of life” in mitochondria, the violation of which leads to ATP deficiency is disclosed.

He made an invaluable contribution to providing evidence of the destructive effect of radioactive waste on the health of people living in the adjacent territories to the Semipalatinsk nuclear region, where he was the first leader on that scientific expedition in 1957-1960.

Author of more than 220 scientific papers, including 11 monographs. More than 40 collections of scientific papers and monographs have been published under his editorship. 15 doctoral and 34 candidate dissertations were defended under the guidance of B.A.Atchabarov.